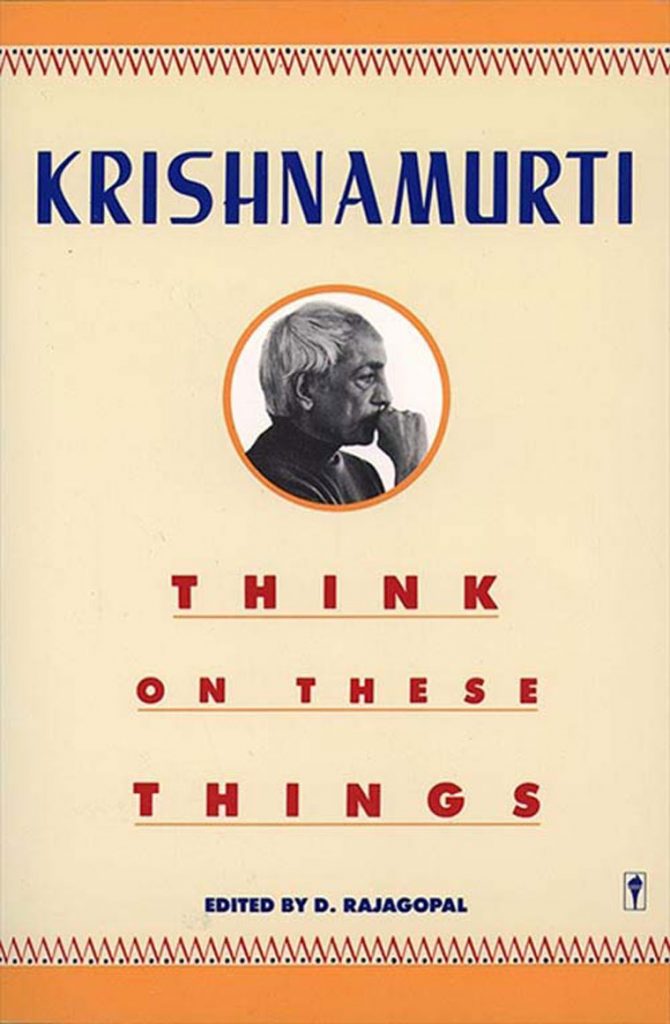 The material contained in this volume was originally presented in the form of talks to students, teachers and parents in India, but its keen penetration and lucid simplicity will be deeply meaningful to thoughtful people everywhere, of all ages, and in every walk of life. Krishnamurti examines with characteristic objectivity and insight the expressions of what we are pleased to call our culture, our education, religion, politics and tradition; and he throws much light on such basic emotions as ambition, greed and envy, the desire for security and the lust for power – all of which he shows to be deteriorating factors in human society.

From the Editor’s Note Krishnamurti’s observations and explorations of modern man’s estate are penetrating and profound, yet given with a disarming simplicity and directness. To listen to him or to read his thoughts is to face oneself and the world with an astonishing morning freshness.’
~ Anne Marrow Lindbergh

"I discovered Krishnamurti during my freshman year in college and it shattered the way I looked (or didn't look) at life. Ten years later, this book still remains by my side. It's hard to pigeonhole it into a particular category. It could be seen as a self-help book, but it really isn't. Krishamurti's advice is among the most unpractical and difficult you'll ever find and there are no magical recipes here. It could be seen as a book on religion, and even though you get a feel for eastern mysticism, it's very much against the superstitions and dogma we associate with religion. To me it's a book on philosophy in the truest sense of the word. Instead of parroting or following a line of thought set forth by others, it is an exercise in the art of questioning everything, in particular the assumptions, traditions, and prejudices that society imposes on us and which we live by without even being aware. It encourages us to discover for ourselves what we mean by truth, beauty, goodness, and God. Buy this book, read it as many times as you can, and please, think on these things."

"This is a very good first book in Krishnamurti's philosophy. However, if you've already read some of his thoughts, this is still a good book to read and re-read.

This collection is a compilation of talks given to groups of students and their teachers in India. It is still of universal appeal and for all stages in life. The occasional references to scenes and situations more familiar to his Indian audience than to us give a slight glimpse into this culture.

The style of writing is simple and direct without patronizing
the younger people in his audience. There are questions from the audience in the last part of each chapter, and are quite penetrating.

One sample of his directness is illustrated by a rather weighty question posed by one of the youngest members of the audience and the author's response which indicated his suspicion that one of the teachers gave the question to the student. Another time, he directly tells the questioner that he wasn't listening to the talk. One student asks a question which pits one of the professors against Krishnamurti, a question well handled by the author.

The reader must be prepared to expect basic thoughts, especialy those involving religion, nationalism, and patriotism, to be challenged. However, these are challenges from one who is a friend, not from a guru or holy person."