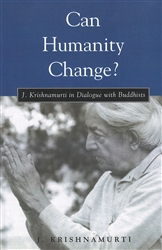 Discussions between Krishnamurti and a group of Buddhist scholars provide a unique opportunity to see what this great teacher had to say about Buddhist teachings.

The conversations, which took place at Brockwood Park, England in the late 1970s, focus on human consciousness and its potential for transformation. When asked about following a guided practice Krishnamurti said, "Oneself is already secondhand, living in the shadow of others, so why look to others?"

Is what is happening in the world pointing to the need for a fundamental change in human consciousness, and is such a change possible? This is an issue at the heart of both Krishnamurti's and the Buddha's teaching, and in 1978 and 1979 the eminent Buddhist scholar Walpola Rahula came to Brockwood Park in England to put questions that had occurred to him from his reading of Krishnamurti's books. The future Chancellor of the Sri Lankan University of Buddhist and Pali Studies, Walpola Rahula was an acknowledged authority on both the Theravada and the Mahaynana schools of Buddhism. He had lectured at universities around the world, and was the author of the article on Buddha in the Encyclopedia Britannica. He had also written a widely known introduction to Buddhism, translated into many languages, called “What the Buddha Taught.” He was accompanied by Irmgard Schloegl, a well-known teacher of Zen Buddhism and for some years the librarian of the Buddhist Society of London.

Nearly all the conversations, in which the physicist David Bohm and the scientist and author Phiroz Mehta also participated, start with Dr. Rahula raising an issue of crucial importance for any radical change in the way we usually see ourselves, others, life, and death. The nature of personal identity, whether there is a relative truth and an ultimate truth, and the distinction between insight and intellectual understanding are all topics on which he argues that the Buddha and Krishnamurti have said substantially the same things. He also explains to Krishnamurti that in his view the original teaching of the Buddha has over the centuries been in many ways misunderstood and misinterpreted, particularly with regard to the nature of meditation and the form of meditation known as satipatthana, or “mindfulness.”

On each occasion, however, instead of discussing whether Dr. Rahula's argument is right or wrong, Krishnamurti moves the debate into quite a different direction. Why, he asks, compare? What is the value of such comparison? Why bring the Buddha into the discussion between the two of them? Courteously, and with a lightness of tone, Krishnamurti challenges Walpola Rahula to say whether he is taking part in the conversation as a Buddhist or as a human being, whether he considers that humanity is in any sense progressing psychologically, what he understands by the word “love”.

Dr. Rahula continues, however, in most of these conversations to draw parallels between what the Buddha has said and what Krishnamurti is saying, so that a reader interested in that inquiry will find much interest. But at another level there is something quite different going on. Time and time again after describing, say, the role of thought in creating the self, Krishnamurti will ask Dr. Rahula and the other participants: Do you see that? The word “see” is rightly emphasized, because the seeing in question is clearly meant to be seeing with such depth and clarity that consciousness and simultaneously action are radically transformed. It is also notable that Krishnamurti unfolds his argument by a series of questions, some which he wants his listeners to allow to sink in rather than to answer – a distinction they do not always find easy to make.

This moves the debate into an area which all of us are familiar with, to some extent at least – understanding verbally, rather than understanding so deeply that we change our behavior. There must be few of us who have not looked at something we have done and said, “I can see why I did that, and I shouldn't have done it,” yet do exactly the same things a short time later. “I shouldn't have taken that criticism personally.” I shouldn't have lost patience.” “I shouldn't have said that, it really doesn't help.” In all these cases one may be able to express with great clarity the reasons why one did what one did and should not do it, and then find oneself doing precisely that again. In other words, our understanding was purely verbal or intellectual, lacking what one might call a radical insight, and definitely not the kind that we refer to when we say, “Then I really understood.”

So what brings about a fundamental change in a human being? And one that brings about an endless, unfolding awareness? This is a question that runs like a silken thread throughout these conversations. Repeatedly Walpola Rahula says all the right words, and Krishnamurti does not deny that his Buddhist questioner may well see the truth to which these words refer. But Krishnamurti urges him to go further and to explain how such seeing comes about, and to discuss the nature and quality of the mind that has such clarity. This is really the kernel of the encounter.

Most of this book consists of these five conversations. Since however, they are concerned with barriers to deep shifts of perception, the book also contains a final section of question in which people who find they have not changed after listening to Krishnamurti ask him to account for this. The various and sometimes vigorous answers he gives may be of as much interest to Buddhists as to students of Krishnamurti, and to readers in neither of the two groups.

What is one to make of this encounter? This seems like a question whose very nature demands that the answer, if there is one, be left solely to the reader.